This paper aims to give a comparison between two architectural structures, namely the seventeenth century St. Paul’s Cathedral in London, by Christopher Wren, and the eighteenth century Ste. Geneviève (Pantheon) in Paris by Jacques-Germain Soufflot.  I will present the similarities between the two buildings that will reflect similar elements that influenced both a ate, architecture culminated into a ‘universal’ Neoclassical flavor. 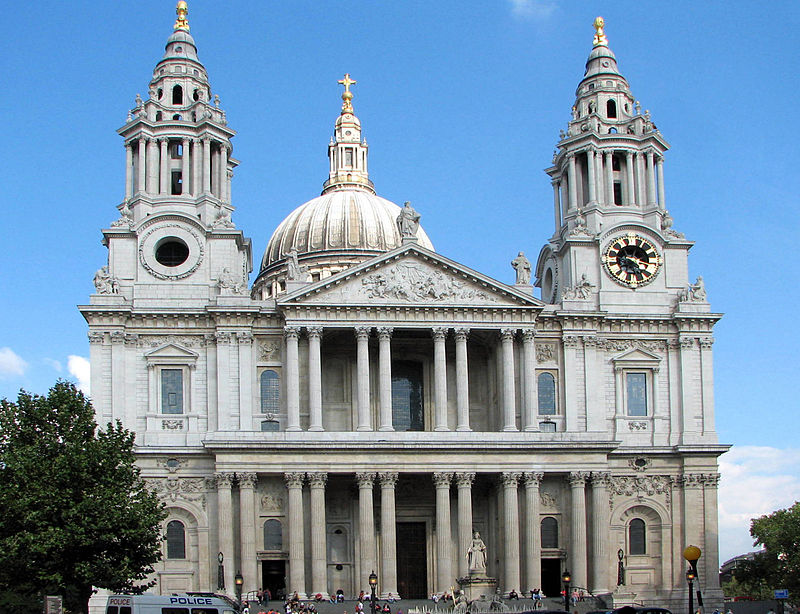 St Paul’s sits at the top of Ludgate Hill, the highest point in the City of London, and is the mother church of the Diocese of London.  It is based on the same site as the original church of AD 604.  The rebuilding of St. Paul’s begun in 1675 and is based on a centralized space with an almost medieval plan, which was so favored by the English love for the medieval.

The Cathedral has an elevation of two stories with a west façade Temple-front.  The entrance is approached by a double staircase leading into the Portico lined with six coupled Corinthian columns in the full.  The portico is supported with a striated entablature that runs horizontally onto the receding façade front, broken with small decorated oval windows.  The entrance is flanked with coupled Corinthian pilasters at the far ends and arched niches crowned with ornate decorations reminiscent of the Baroque, Renaissance, and Ancient Roman triumphal arch.

The second storey is an almost repetition, yet miniature version of the first storey, consisting of four coupled Corinthian columns in the full, yet another Baroque feature in its unity of grandeur.  The entablature with pediment is in the Doric order, with the tradition of Ancient Greek temple-fronts containing triglyph and metope.

However, Wren has adopted an unconventional fusion of the Corinthian column and traditional Doric order in its entablature, ensuring a dramatic element of Baroque-ness.  The Pediment is filled with sculptural relief forms, in gradation.  Sculptures in the round decorate all corners of the second storey and the very top of the pediment.  Two flanking towers steer upward, resembling the elements of the Gothic steeple, and Borromini’s Baroque use of the curvilinear ebb and flow of receding and protruding walls, dressed with ornament.  The double-shell dome is as wide as the nave and aisles together, and is appropriated in the tradition of St. Peter’s, yet with French specimens.  Moreover, the coupled columns are a derivation from Perrault’s east façade of the Louvre.  As Kostof reiterates, the ‘new’ in architecture is the reordering of the old, and of course St. Paul’s gave England a taste of the majestic scale of continental Baroque, and a claim to serious international attention.”[1]

It is within the context of experimentation with exotic (imperialism) and historical modes (theories of Vitruvius), which brought about the questioning of absolute validity of classical design.  In England, the Palladian style had ruled with Inigo Jones adaptations of the Venetian Palladian style that became so fashionable within England.  A lively debate grew within the seventeenth century Europe between Ancients and Moderns.

In architecture, the battle was joined between the new discovery of science and thinking between two ‘schools’ of architecture, i.e. those who followed the guidelines of the antiquity, and those who defended the right to vary and amend the theories and buildings of the ancient world, which subsequently culminated into the Neoclassical period.  Moreover, there were quarrels between Greece vis-a-vis Rome as the more favorable.[2]

The principal was that architecture should be thought of as a science, and “not as the province of artistic imagination governed by rules.”[3]  Christopher Wren and Soufflot converse on similar paths when comparing St. Paul’s Cathedral in London, and Soufflot’s Ste. Geneviève in France. 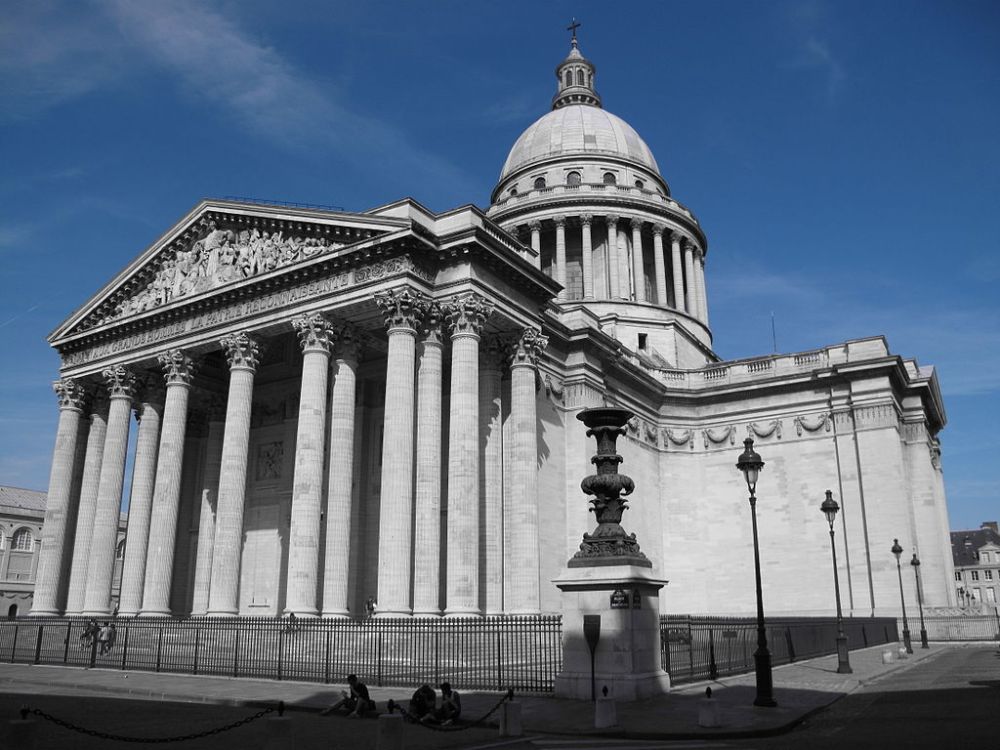 However, Wren’s St. Paul’s Cathedral can be placed as a bench-mark in proclaiming architecture as a science.[4]  Soufflot, can be seen as marking a transition and economizing architecture towards Neoclassicism, a universal need for a modern culture.

Jacques-Germain Soufflot believed that by projecting an empirical method, he believed this could take place through the study of Gothic architecture,  “we should be able to find the right mean between their style and our own”, which is what he expressed in his renowned Parisian church of Ste.-Geneviève.[5]  The church was renamed The Pantheon, that had changed in function as church twice, and as mausoleum.  The church was begun in 1754.  The idea was to honor the church to the patron saint of Paris, along the similar elements of Christopher Wren’s St. Paul’s Cathedral.  The differences are most obvious in the completely different facades.  Wren’s Cathedral has an elevation of two stories, whilst Soufflot’s Pantheon is the geometric structure, with portico and pediment and single Corinthian columns.  Wren had created a system of piers, whereas Soufflot, had it carried by the columns that had subsequently been strengthened later with piers.  The pediment:  was completed by David d’Angers, reflecting the symbols of Nationalism, the fatherland in center and civic life and historicism.

The most influential theorist during the ‘rationalist’ eighteenth century, Abbé Marc-Antoine Laugier, whom had based his manifesto of 1753 on the theories of Vitruvius.  He had based his writings of structural rationalism on the absolute ideal of the post and lintel concept of architecture.  This approach merely allowed for a new language that redefined and purified ‘Classical’ elements of architecture, allowing for a more universal ‘international’ style.  It is within this ideology that Soufflot managed to convey a sense of solidity that characterizes the neoclassical period, by drawing the similarities based upon Wren’s model of the St. Paul’s Cathedral.[6]  Like Christopher Wren, Soufflot planned a symmetrical Greek cross with dome over the crossing.  Soufflot too, had to modify the plan by extending the nave, like Wren too; he aimed to combine Gothic structure and sense of space with consistently classical forms.  Soufflot used a Gothic system of forces in equilibrium, expressed in purely classical terms.  The dome too is yet another example of Wren’s influence, which gives St. Paul’s Cathedral its ‘Baroqueness’ in grandeur.[7]

The central challenge of all this experimentation with exotic and historical modes was to question the absolute validity of classical design.

Universal acceptance of certain general rules had ensured a truly astonishing unity of architectural thinking during three centuries.  By the mid-eighteenth the new language of architecture became the trend.  It seemed that the Classical tradition should be considered at best the most worthy of a number of permissible sources for contemporary architecture.[8]

Sutton, Ian. Western Architecture: A Survey from Ancient Greece to the Present.  London: Thames and Hudson, 1999.