BY FOOT INTO THE GOLDEN AGE

Athens by foot can be the most rewarding activity for individuals wanting to explore the ancient city of Athens.  With the added benefit in keeping fit whilst on holiday of course. By traversing the ancient paths of Athens you get to meander and absorb the history via a three kilometer pedestrian zone, making it the largest in Europe.  It connects and leads to the major archaeological sites, simulating the ancient landscape.  Either on foot or by bike, you can follow the “Grand Promenade” that circles the great Temple of Athena, The Acropolis.  It truly makes an unforgettable experience, an authentic journey through history…

Too often, visitors to Athens only walk through Monastiraki, Plaka and the Acropolis without realising the plethora of history that circulates the Acropolis.

Come and Join me on a walk into the Golden Age

We start the tour from Syntagma (Constitution) Square, (opposite the Parliament building, also being the former Palace of King Otto I & Queen Amalia from the 19th Century) – and the changing of the guards can be seen here).  How to get there: with the main Metro rail line stop – both the Blue Line (Line 3) connects with the Red Line (Line 2) here.

In a clock-wise direction: We commence our walk towards the National Gardens via Leoforos (this Avenue is named after Queen Amalia as the current Parliament building), after which you will find the Great ruined Temple of Olympian Zeus (6th century BCE), one of the largest in antiquity in the centre of the Greek capital.  The Graeco-Roman Temple is otherwise known as Olympieion, or the columns of Olympian Zeus.  The term Graeco-Roman is applied due to there being different architects and rulers from different periods before common error (BCE/BC) and during common error (CE/AD) – during the period Alexander the Great’s conquest).

The earliest archaeological evidence in the area dates to the 6th century BCE.  The tyrant Peisistratos the Younger (belonging to an aristocratic family) began to build a new and much bigger Doric temple in 515 BCE, but work got no further than the base before Peisistratos went into exile and the project was abandoned. 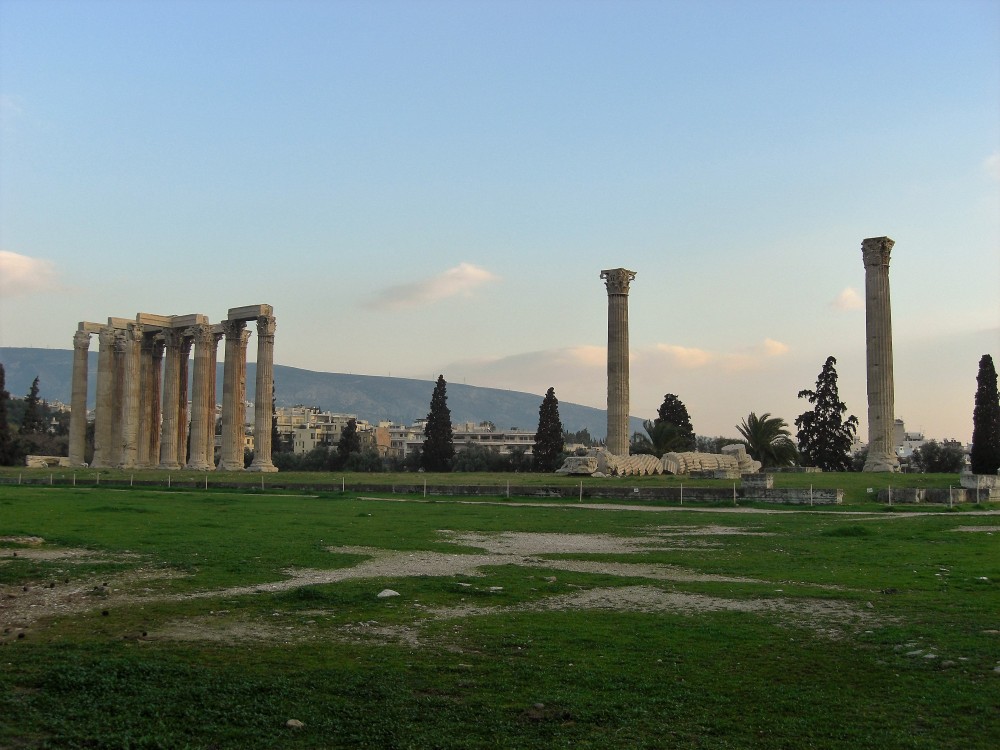 After a few centuries later, Hadrian continued the construction whilst he was visiting Athens between 124 and 125 CE/AD.  The great philhellene finally managed to finish one of the greatest ancient temples in c. 131 CE/AD. 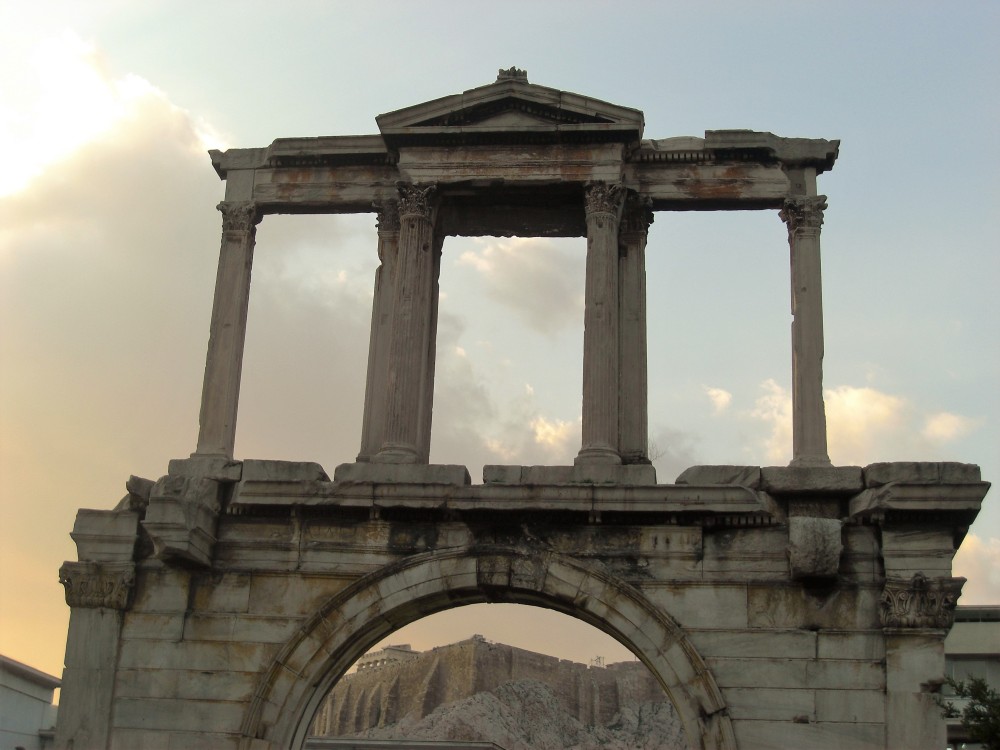 Right in front of the Temple, is Hadrian’s Arch c. 131 CE, and stands as a monumental (triumphant) symbol to the entrance into the city (separating the old city with the new).  From here, continue walking along Dionyssiou Areopaghitou Street, towards the ancient open Theatre of Dionyssos (5th century BCE – the birthplace of Greek tragedies) where the ancient plays of Sophocles, Euripides, Aeschylos and Aristophanes were performed. 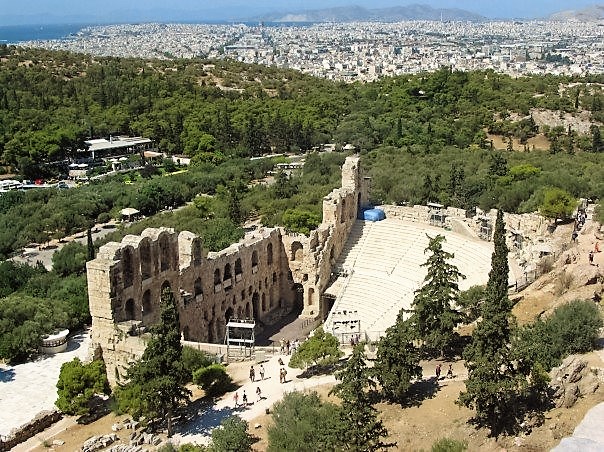 Continue, until you reach the ruins of the Asclepieion (Greek God of Medicine,generally recognised by the symbol of a snake wrapped around a staff) – (5th century BCE) – based on the southern slopes of the Acropolis via a Propylon (Roman gateway).  The sanctuary consisted of the small temple of Asclepius and two stoas.  The one was in the Doric order with two-stories.

You can either enter the Acropolis museum from here, or opt to visit the museum after your visit to the Acropolis.

From there you can walk uphill to the sacred rock of the Acropolis.  Once reaching the top, you are able to view and marvel at some of the most important architectural masterpieces in the world, such as Propylaea (entrance), the temple of Athena Nike (Ionic Order – c. 420 BCE) and the Caryatids of The Erechtheion (c. 421 BCE to 405 BCE), with the Temple of Athena, The Parthenon (c. 440 BCE) being the crown of temples, built by Callicrates and Iktinos during the 5th century BCE and gloriously decorated by the famous sculptor of the time, Phidias. 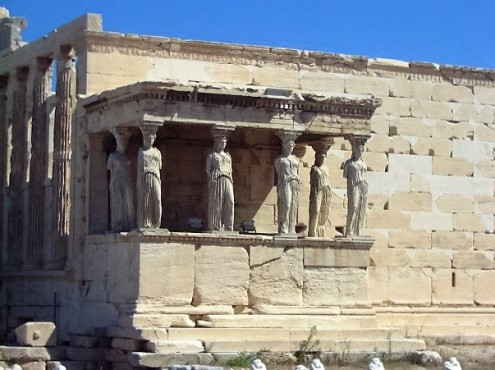 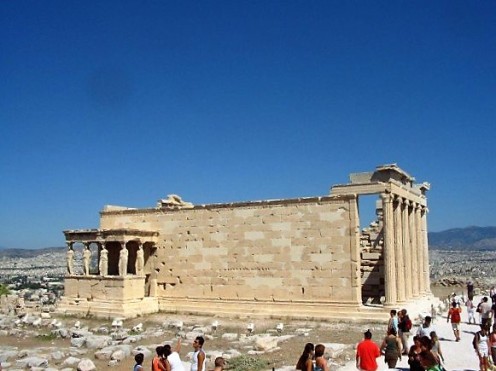 Image plan credited to By MHz`as (Own work)

Opposite the entrance to the Acropolis is a huge white rock/hill called Areopagus Hill, in Greek it literally means the hill of Ares.  There are some stairs carved into the side of the rock or opt for the modern steel stairs to climb the rock.  From the Areopagus you get to see some great views of the Acropolis, especially the Propylaea (plural form of Propylon – as it held a five-fold system of entrances) and even better views of the ancient Athens Agora.

The Areios Pagos is said to be the most ancient law court in the world.  The trial of Orestes for the murder of his mother Clytemnestra took place here too.  It is also here that the Apostle Paul is said to have delivered the famous speech, “Now what you worship as something unknown I am going to proclaim to you. The God who made the world and everything in it is the Lord of heaven and earth and does not live in temples built by hands.” (Acts 17:24)

Right opposite the Areios Pagos, beautiful cobbled roads lead to the Roman monuments adorning the Philoppapou Hill.  Philopappou Hill includes: the Hill of the Muses, the Hill of the Nymphs, and the Pnyx.  Close by the ancient Pnyx was the place where Athenians used to assemble and exert their democratic rights.

Walking farther along the pedestrian road, you arrive at Ancient Agora, the commercial, political and religious centre of ancient Athens and the Temple of Hephaistos, the best-preserved temple of Greek antiquity. 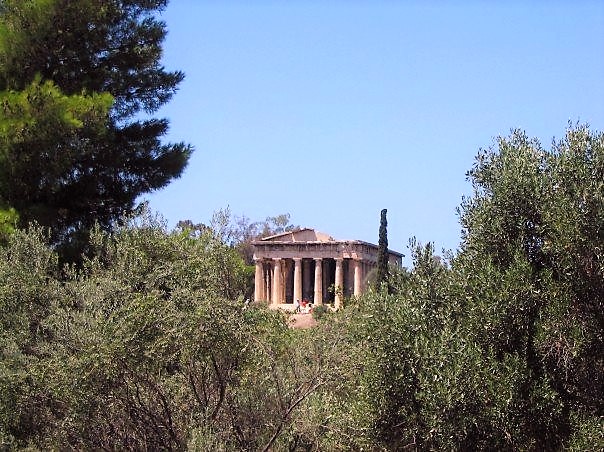 Theseo is the area around the ancient Agora, going downhill from the Areopagus (Areios Pagos) and Acropolis along Apostolou Pavlou street.  The area takes its name from the Athenian hero Theseus / Theseion, that mistakably is used for the temple of Hephaisteion in the Athenian Agora.  As mentioned, the Temple of Hephaisteion is remarkably preserved in the Doric architectural order, with the temple yielding a ratio of 9:4 between its width and the height of the columns, along with the length to its width 9:4. 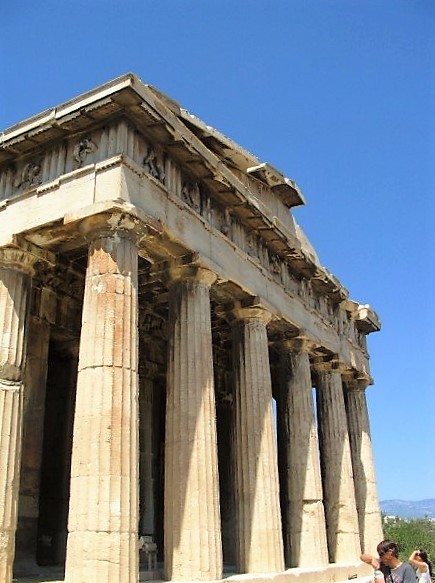 The area has some great views of the Agora and of the Acropolis and Parthenon, the walk down Apostolou Pavlou street is very relaxing.  The wide street has been pedestrianized and has lots of cafes, bars and ice-cream shops along the road – looking over the Acropolis and the ancient Agora you feel the atmosphere of ancient Athens – with no modern structures interfering with the views. 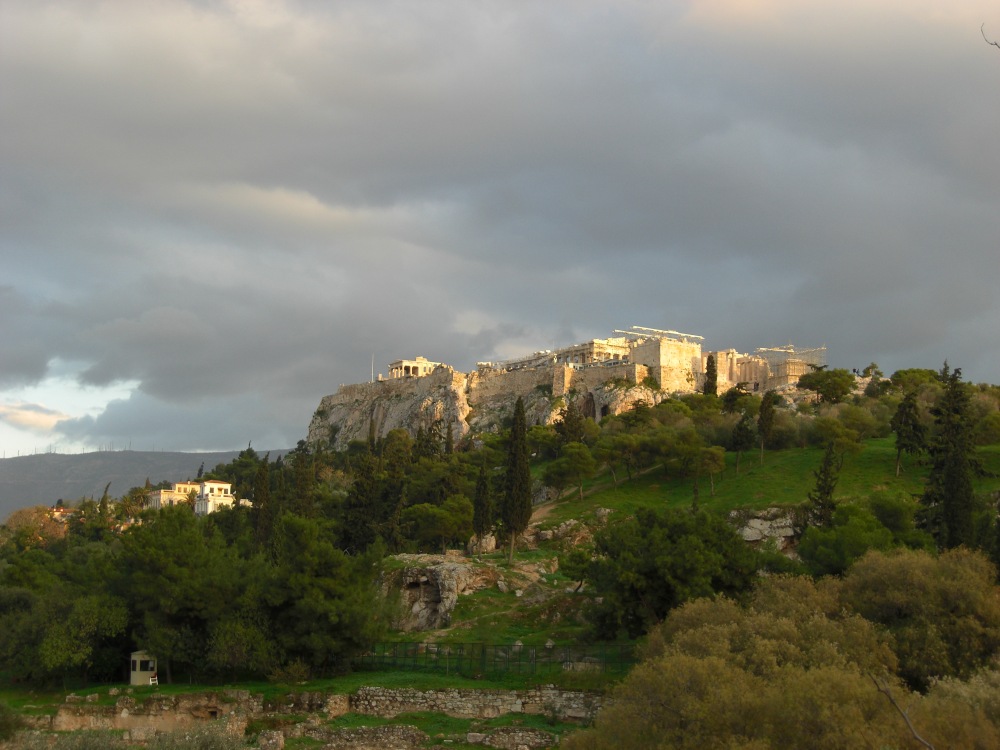 Nearby, you will find the Roman Agora with the famed “Tower of Winds” (1st century BCE/BC) and Hadrian’s Library (c. 132 CE/AD).  Continue via Ermou Street that will lead you to Kerameikos.  Kerameikos was most probably named after the number of potters that resided in the area during the Classical period, and is said to be the largest cemetery of the ancient city, with impressive tomb sculptures and stelae/columns.

From here, you can either continue via Plaka, or Monastiraki towards the Acropolis Museum if you did not get a chance to enter the Museum earlier. 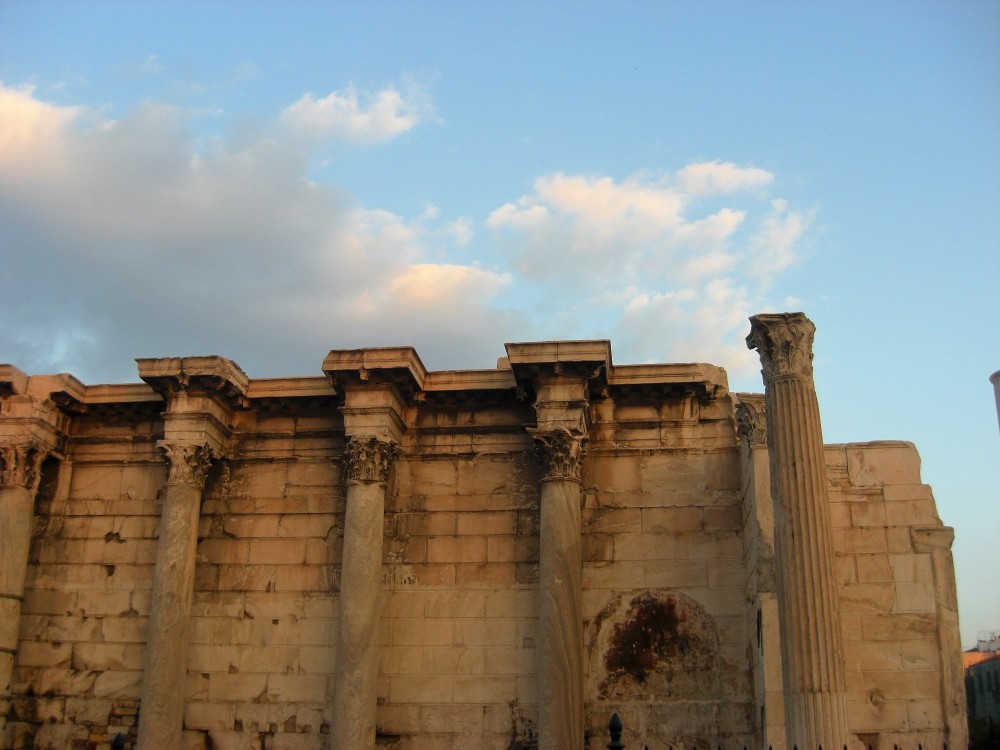 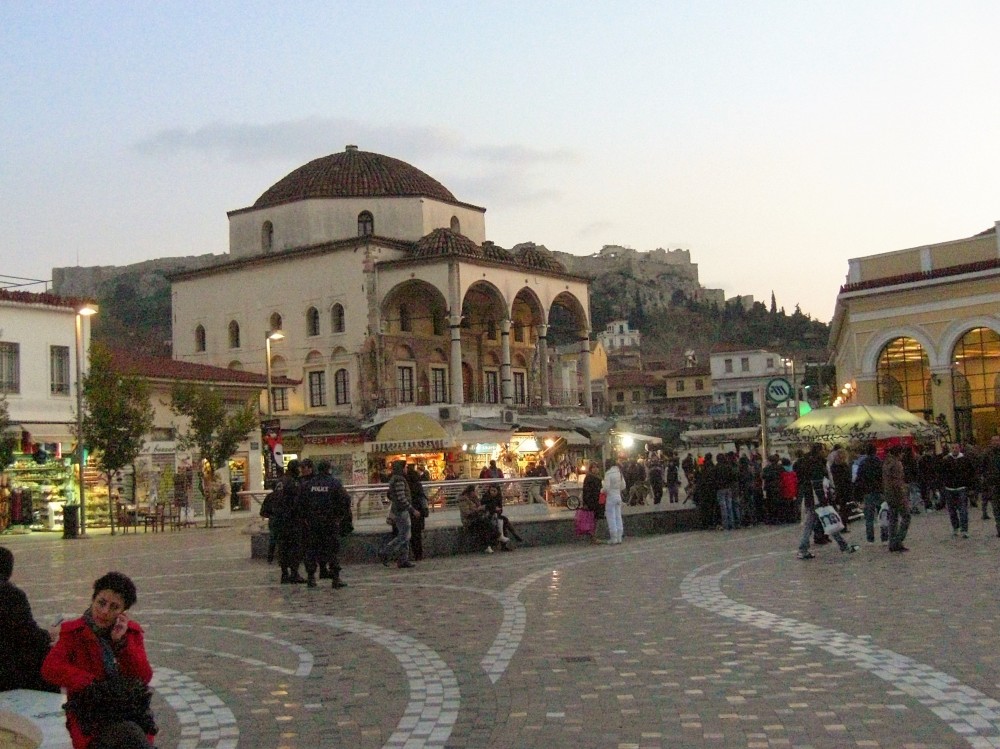 What to take with you:

Good walking shoes, lots of water that can be purchased en-route, Entrance fees, Map, Sun glasses, Sun block, Camera, Hat, and don’t forget to stop en-route and immerse yourself by relaxing at one of the cafe’s for an ice-coffee (frappe), or ice tea.  If you intend visiting some of the many churches en-route, ensure that you are dressed appropriately, along with giving a donation if lighting candles for your loved ones. There are plenty of places to purchase a snack, such as a Pita wrap (Souvlaki / Yiro Pita) in Plaka and Monastiraki, or enjoy a light lunch at the beautiful Acropolis Museum.