Courbet and Schiller:  A Burial of Romanticism

In this paper I am going to discuss the revolutionary French painter of the 19th century, Jean Désiré Gustave Courbet through the notion of aesthetic and political freedom, as restated by the German philosopher Friedrich von Schiller in his Letters on the Aesthetic Education of Mankind (1793-4).  Due to the social make-up that aspired both Courbet and Schiller in their manifestos of expression, a sociological backbone is exemplified to complement the afore-mentioned views, as “Ideally, bearers of sociological ideas enrich and complement those of aestheticians and humanist scholars.”[1]

“The most perfect of all works of art,” Schiller says, is “the construction of true political freedom.”[2]  Here he draws inspiration from the Platonic duality of human nature that consists of the opposing powers of sense and reason.  Moreover, Schiller exemplifies the contrast between the cultural form of humanity in ancient Greece and that of modern times.  Schiller claims that the senses and the spirit had no distinct separate property within the Grecian nature, and that a combination of all the charms of art and all the dignity of wisdom was reciprocal.[3]  Schiller maintains that the Greeks received their forms from nature, for nature is that which unifies all things, while modern man received his forms from reason, which has divisive properties.  Humanity depends upon a dynamic balance between the passive and active impulses (the opposing powers of sense and reason).[4]  He states that “the most perfect of all works of art,” is to maintain equilibrium between sense and reason, a “reciprocal relationship” between the need for reality and order.[5]

Schiller was a strong follower of Immanuel Kant.  At the heart of Kant’s moral theory is the position that rational human wills are autonomous.  Immanuel Kant’s Groundwork of the Metaphysic of Morals (Grundlegung zur Metaphysik der Sitten, 1785) develops the logical foundation for a moral philosophy which is based on a priori (independent of experience) rather than a posteriori (based on experience) principles.  Kant however maintains that rationalism in making ethical judgments is necessary because only pure reason can define practical principles of morality which have universal validity.  He argues that moral requirements are based on a standard of rationality he dubbed the “Categorical Imperative” (CI).  Kant saw this as the key to understanding and justifying the authority moral requirements have over us (as will be seen, Courbet, as a “socialist” defies authoritarian requirements which the Academy and the French elitists try to impose upon him).  According to Rousseau, whose views influenced Kant, freedom is not bound by external laws, but by laws that are of one’s own making.  Laws made and laid down by one self are first and foremost, and, in virtue of this, these are the laws that have decisive authority over oneself.  This concept of autonomy of moral judgments permeates the work of Courbet.  While Kant appears not to recognize the gap between the law of an autonomous rational will and the CI, Schiller attaches great importance to Kant’s source for morality, the idea that the will is, and has to be, free from the determinations of nature.[6]  To be truly moral in person, one has to fight against nature, in the form of passions, sentiments, and desires, which Kant refers to as inclinations.  Kant, who places the visual arts below poetry, establishes the following foundations for viewing art: disinterestedness, beauty (purposeiveness without purpose), necessity, and absolute universality of aesthetic criteria.  The role of the artist is missing from the above-mentioned criteria.[7]

With the onset of Romanticism, artists yearn to create new “rules” for art by breaking rules through creative invention.  It is Schiller who breaks the gap in the Kantian philosophy by focusing on the artist.  When faced with the duality of the modern mind, (intellect and emotion), Schiller focuses on the emotional aspect of alienation.  The conception of alienation is prevalent in the Romantic era of subjectivism as opposed to the concepts of reason and rationality which emerged during the Enlightenment.  It is through this alienation of the artist in the modern world that Schiller and Courbet seek to lead humans towards wholeness through art, where intellect and emotions could be resolved into a healthy and united whole, Realism.[8]

Jean Désiré Gustave Courbet was a French painter born in the rural setting of Ornans,

Franche-Comté (10 June 1819).[9]  He bridged the Romantic Movement with the Barbizon School and the Impressionists.[10]  Courbet opposed the traditions of hierarchical subject matters, such as history and mythology.  Instead, Courbet risked his reputation in search of new methods of visual expression – opposing the “effective approach” and breaking away from the traditional methods of art making that were proposed by the academies of his time.  In fact, he stated that “the artists of one century [are] basically incapable of reproducing the aspect of a past or future century …”[11]  For Courbet, the only possible source for a living art is the artist’s own experience.  It comes as no surprise, that Courbet led the Realist movement within French painting.  Moreover, Courbet’s Realism did not deal with the perfection of line and form as one would assume; instead he applied spontaneous, rough paint brush strokes on the canvas.  It was society that captured Courbet’s depictions, a society of harshness which led him to challenge contemporary academic ideas of art.

The revolts and uprisings of the 1800’s in France, England and Germany inspired the Enlightenment poets and writers alike.  Industrialization in Europe along with the subsequent liberalization of the economy during this century (Laissez-faire) created two distinct social categories: the wealthy capitalists and the destitute proletarians.  Given this brief socio-political backdrop to Gustave Courbet’s environment, the need to explore his manifesto requires the investigation of his work.

It is from here that I will draw the thread of political freedom within Courbet as the artist and his work that we can identify as avant-garde.  A selection of two works of art to convey the so called ‘stigma’ attached to Courbet’s Realism can be viewed in Burial at Ornans, (fig. 1) and The Painter’s Studio.  (fig. 2)

A Burial at Ornans,[12]  is one of Courbet’s masterpiece paintings that was exhibited in the Salon of 1849-50.  The Burial scene can be viewed and read as a Manifesto of Courbet’s persona.  His approach incorporates a new artistic language.  A language for a period that was unknown to the viewers of his time.  The traditions of the French Academy maintained their expressions as precepts (laws) within heroic scenes of grandeur, whereas the Burial at Ornans exposing a “realistic” scene in a rural setting is a deviation from the historical themes prescribed by the Academy.  Courbet is seen as posing a further threat to the upper echelons of society by heroizing the rural social class through purposefully selecting a large-size canvas for his painting.  Furthermore, the daily life subject matter “genre” scene of a burial outside his home town was a further blow to the society of “high” art.  His rejection of idealistic scenes of emotions and theatricality puzzled the critics of the time. In fact, it seemed as if Courbet were mocking the whole matter.  It is no surprise that Courbet was considered a radical socialist:  beyond the evocations of the audience, he went further and above the traditions in his style and technique of painting.  For example, he emphasized the extraordinary effects of texture, that convey a physical presence, such as the large area of unbroken black pigment formed by the women’s dresses at the right and the fact that the subject matter is placed at eye level so as to engulf the viewer regardless of his or her social status.  All of the above “deviations” were misunderstood as a violation against the academic teachings, and not as an artistic breakthrough. Moreover, his critics complained that the old women were portrayed as “ugly,” that the men were probably intoxicated, and the religious setting lacked spirituality.[13]  There is a paradox here that alerts us to the nature of Courbet’s Realism: he captures the truth of the moment.  Courbet follows a portrayal of disinterest within the expression of the mourners, unlike the “idealistic” portrayals of his predecessors.  In fact, when viewing the canvas we cannot help noticing the various directions of glances, as if the mourners were in a state of contemplativeness. 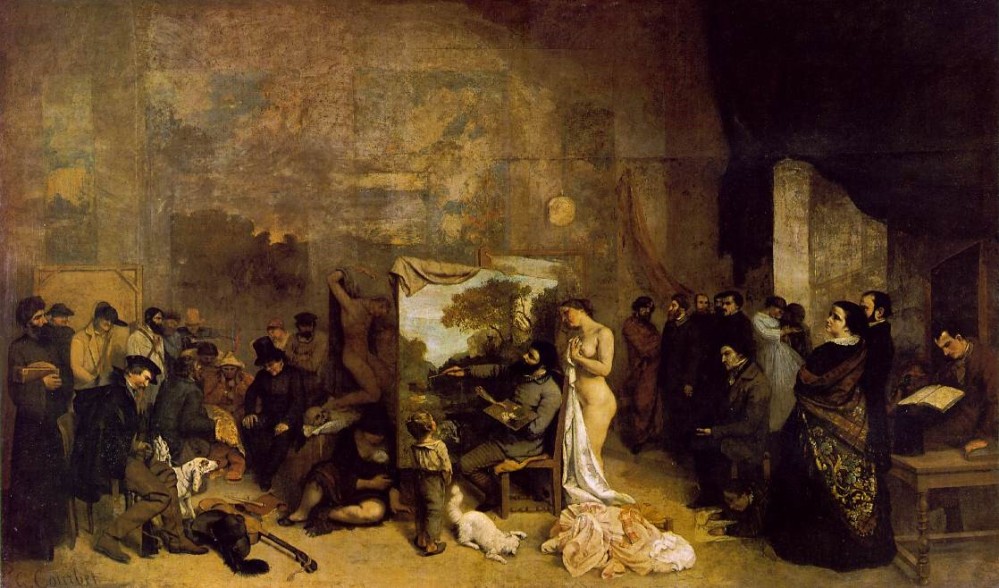 The culmination of Courbet’s work features his relationship to society in the Painter’s Studio,[14] (fig. 2) which was initially rejected by the Exposition Universelle held in Paris in 1855.  Needless to say, eleven of Courbet’s other paintings were accepted.  However, this did not stop Courbet from exhibiting the Painter’s Studio, as he funded and held it at the independent exhibition in the Pavillon du Réalisme on a site close to that of the official exhibition.  Courbet manifests his aesthetic reality through a composition that consists of three distinct parts:  at the center we can see the depiction of ‘nature’: Courbet portrays himself painting a landscape next to a “classic” nude woman, a cat and a peasant boy.  On the left, he depicts the ‘external’ or political world comprising proletarians, and on the right the ‘internal’ or aesthetic world represented by the ‘elite’ of French society.   Schiller’s philosophy is most evident in that the artist portrays himself confidently in the center of the painting, in order to emphasize the reciprocal relationship between the two worlds. Moreover, Courbet conveys Schiller’s idea of nature having a unifying power: in the case of the Painter’s Studio nature is depicted as bridging the huge gap between the two contrasting social classes.  In essence, Courbet views nature, rather than politics or industry, as having the power for the renewal and reconciliation needed by contemporary society.  In this sense, the Painter’s Studio (fig. 2) has a didactic element as well as containing a vision for the future.

Schiller’s correspondence with Due Christian von Augustenburg (Feb. 1793) concerning the nature of beauty, culminated in Über die ästhetische Erziehung des Menschen in einer Reihe von Briefen published in 1795.  In this work we are presented with Schiller’s definitions of instinct, pleasure, freedom and the role of the artist in society.  Another work by Schiller,   Sur l’éducation publique, provides the sociopolitical context for the development of his observations concerning man’s potential for attaining freedom through aesthetic education.  Schiller frequently employs pictorial descriptions in his literary works.  It is clear that Schiller recognized that pictorialism could fulfill two important functions within the structure of his work.  Firstly, a “verbal painting” could offer a means to avoid idealized theatricality.  Secondly, such a pictorial description could create aesthetic distance, thus enabling the reader or viewer to “rise above purely emotional identification with a work.”[15]  Furthermore, Schiller employs long pictorial descriptions in order to interrupt an action, as we have noticed in the contemplative mode in Courbet’s Burial at Ornans.  By drawing parallels with Schiller, Daemmrich epitomizes the recognition of this mode through Schiller’s attempt to free his spectator from a “too passionate involvement with the character’s fate and ultimately lead him into a state of serene contemplation.”[16]  The correlation between Schiller (1759-1805), and Courbet (1819-1877) is therefore evident in their works toward new aesthetic theories, and provides more reason to contemplate on the meaning of art.

William Morris, a 19th century British craftsman, designer, writer, typographer, and Socialist proclaims that the socialist ideal of art is that it should be common to the whole people.  In his words: “the socialist claims art as a necessity of human life, which society has no right to withhold from any one of the citizens.”[17]  Courbet in return creates a niche for a new art thus catering for a new emerging class that captures the “reality” and “essence” of its epoch which marks the transition to modernity.

[10]  The Barbizan School was a movement towards realism in art which arose in the context of the dominant Romantic Movement of the time.